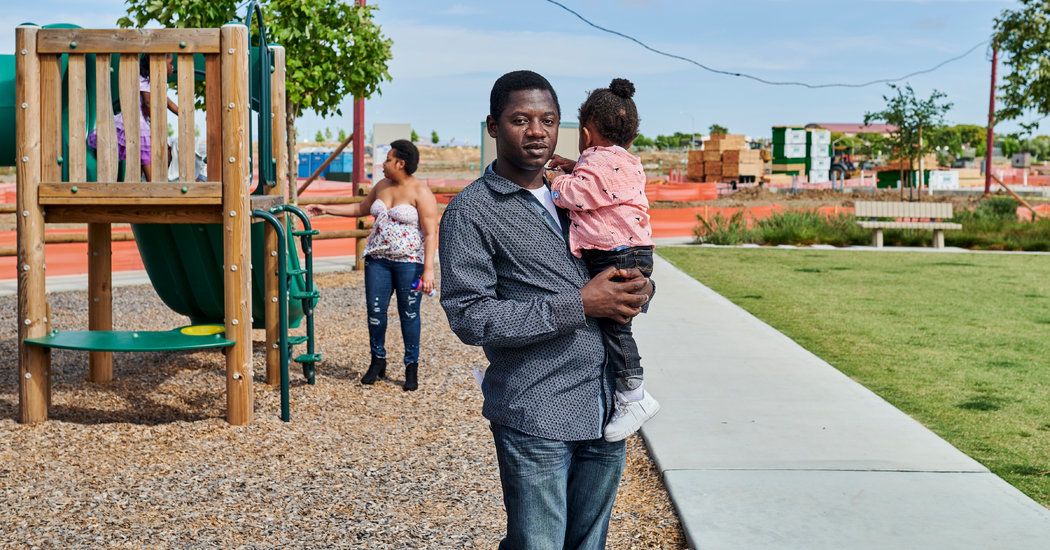 Richard Dobatse, a Navy medic in San Diego, dabbled infrequently in stock trading. But his behavior changed in 2017 when he signed up for Robinhood, a trading app that made buying and selling stocks simple and seemingly free.

Mr. Dobatse, now 32, said he had been charmed by Robinhood’s one-click trading, easy access to complex investment products, and features like falling confetti and emoji-filled phone notifications that made it feel like a game. After funding his account with $15,000 in credit card advances, he began spending more time on the app.

As he repeatedly lost money, Mr. Dobatse took out two $30,000 home equity loans so he could buy and sell more speculative stocks and options, hoping to pay off his debts. His account value shot above $1 million this year — but almost all of that recently disappeared. This week, his balance was $6,956.

“When he is doing his trading, he won’t want to eat,” said his wife, Tashika Dobatse, with whom he has three children. “He would have nightmares.”

Millions of young Americans have begun investing in recent years through Robinhood, which was founded in 2013 with a sales pitch of no trading fees or account minimums. The ease of trading has turned it into a cultural phenomenon and a Silicon Valley darling, with the start-up climbing to an $8.3 billion valuation. It has been one of the tech industry’s biggest growth stories in the recent market turmoil.

But at least part of Robinhood’s success appears to have been built on a Silicon Valley playbook of behavioral nudges and push notifications, which has drawn inexperienced investors into the riskiest trading, according to an analysis of industry data and legal filings, as well as interviews with nine current and former Robinhood employees and more than a dozen customers. And the more that customers engaged in such behavior, the better it was for the company, the data shows.

More than at any other retail brokerage firm, Robinhood’s users trade the riskiest products and at the fastest pace, according to an analysis of new filings from nine brokerage firms by the research firm Alphacution for The New York Times.

The more often small investors trade stocks, the worse their returns are likely to be, studies have shown. The returns are even worse when they get involved with options, research has found.

This kind of trading, where a few minutes can mean the difference between winning and losing, was particularly hazardous on Robinhood because the firm has experienced an unusual number of technology issues, public records show. Some Robinhood employees, who declined to be identified for fear of retaliation, said the company failed to provide adequate guardrails and technology to support its customers.

Those dangers came into focus last month when Alex Kearns, 20, a college student in Nebraska, killed himself after he logged into the app and saw that his balance had dropped to negative $730,000. The figure was high partly because of some incomplete trades.

“There was no intention to be assigned this much and take this much risk,” Mr. Kearns wrote in his suicide note, which a family member posted on Twitter.

Like Mr. Kearns, Robinhood’s average customer is young and lacks investing know-how. The average age is 31, the company said, and half of its customers had never invested before.

Some have visited Robinhood’s headquarters in Menlo Park, Calif., in recent years to confront the staff about their losses, said four employees who witnessed the incidents. This year, they said, the start-up installed bulletproof glass at the front entrance.

“They encourage people to go from training wheels to driving motorcycles,” Scott Smith, who tracks brokerage firms at the financial consulting firm Cerulli, said of Robinhood. “Over the long term, it’s like trying to beat the casino.”

At the core of Robinhood’s business is an incentive to encourage more trading. It does not charge fees for trading, but it is still paid more if its customers trade more.

That’s because it makes money through a complex practice known as “payment for order flow.” Each time a Robinhood customer trades, Wall Street firms actually buy or sell the shares and determine what price the customer gets. These firms pay Robinhood for the right to do this, because they then engage in a form of arbitrage by trying to buy or sell the stock for a profit over what they give the Robinhood customer.

This practice is not new, and retail brokers such as E-Trade and Schwab also do it. But Robinhood makes significantly more than they do for each stock share and options contract sent to the professional trading firms, the filings show.

For each share of stock traded, Robinhood made four to 15 times more than Schwab in the most recent quarter, according to the filings. In total, Robinhood got $18,955 from the trading firms for every dollar in the average customer account, while Schwab made $195, the Alphacution analysis shows. Industry experts said this was most likely because the trading firms believed they could score the easiest profits from Robinhood customers.

Vlad Tenev, a founder and co-chief executive of Robinhood, said in an interview that even with some of its customers losing money, young Americans risked greater losses by not investing in stocks at all. Not participating in the markets “ultimately contributed to the sort of the massive inequalities that we’re seeing in society,” he said.

Mr. Tenev said only 12 percent of the traders active on Robinhood each month used options, which allow people to bet on where the price of a specific stock will be on a specific day and multiply that by 100. He said the company had added educational content on how to invest safely.

Robinhood does not force people to trade, of course. But its success at getting them do so has been highlighted internally. In June, the actor Ashton Kutcher, who has invested in Robinhood, attended one of the company’s weekly staff meetings on Zoom and celebrated its success by comparing it to gambling websites, said three people who were on the call.

Mr. Kutcher said in a statement that his comment “was not intended to be a comparison of business models nor the experience Robinhood provides its customers” and that it referred “to the current growth metrics.” He added that he was “absolutely not insinuating that Robinhood was a gambling platform.”

Robinhood was founded by Mr. Tenev and Baiju Bhatt, two children of immigrants who met at Stanford University in 2005. After teaming up on several ventures, including a high-speed trading firm, they were inspired by the Occupy Wall Street movement to create a company that would make finance more accessible, they said. They named the start-up Robinhood after the English outlaw who stole from the rich and gave to the poor.

Robinhood eliminated trading fees while most brokerage firms charged $10 or more for a trade. It also added features to make investing more like a game. New members were given a free share of stock, but only after they scratched off images that looked like a lottery ticket.

The app is simple to use. The home screen has a list of trendy stocks. If a customer touches one of them, a green button pops up with the word “trade,” skipping many of the steps that other firms require.

Robinhood initially offered only stock trading. Over time, it added options trading and margin loans, which make it possible to turbocharge investment gains — and to supersize losses.

The app advertises options with the tagline “quick, straightforward & free.” Customers who want to trade options answer just a few multiple-choice questions. Beginners are legally barred from trading options, but those who click that they have no investing experience are coached by the app on how to change the answer to “not much” experience. Then people can immediately begin trading.

Before Robinhood added options trading in 2017, Mr. Bhatt scoffed at the idea that the company was letting investors take uninformed risks.

“The best thing we can say to those people is ‘Just do it,’” he told Business Insider at the time.

In May, Robinhood said it had 13 million accounts, up from 10 million at the end of 2019. Schwab said it had 12.7 million brokerage accounts in its latest filings; E-Trade reported 5.5 million.

That growth has kept the money flowing in from venture capitalists. Sequoia Capital and New Enterprise Associates are among those that have poured $1.3 billion into Robinhood. In May, the company received a fresh $280 million.

“Robinhood has made the financial markets accessible to the masses and, in turn, revolutionized the decades-old brokerage industry,” Andrew Reed, a partner at Sequoia, said after last month’s fund-raising.

Mr. Tenev has said Robinhood has invested in the best technology in the industry. But the risks of trading through the app have been compounded by its tech glitches.

In 2018, Robinhood released software that accidentally reversed the direction of options trades, giving customers the opposite outcome from what they expected. Last year, it mistakenly allowed people to borrow infinite money to multiply their bets, leading to some enormous gains and losses.

Robinhood’s website has also gone down more often than those of its rivals — 47 times since March for Robinhood and 10 times for Schwab — according to a Times analysis of data from Downdetector.com, which tracks website reliability. In March, the site was down for almost two days, just as stock prices were gyrating because of the coronavirus pandemic. Robinhood’s customers were unable to make trades to blunt the damage to their accounts.

Four Robinhood employees, who declined to be identified, said the outage was rooted in issues with the company’s phone app and servers. They said the start-up had underinvested in technology and moved too quickly rather than carefully.

Mr. Tenev said he could not talk about the outage beyond a company blog post that said it was “not acceptable.” Robinhood had recently made new technology investments, he said.

Plaintiffs who have sued over the outage said Robinhood had done little to respond to their losses. Unlike other brokers, the company has no phone number for customers to call.

Mr. Dobatse suffered his biggest losses in the March outage — $860,000, his records show. Robinhood did not respond to his emails, he said, adding that he planned to take his case to financial regulators for arbitration.

“They make it so easy for people that don’t know anything about stocks,” he said. “Then you go there and you start to lose money.”