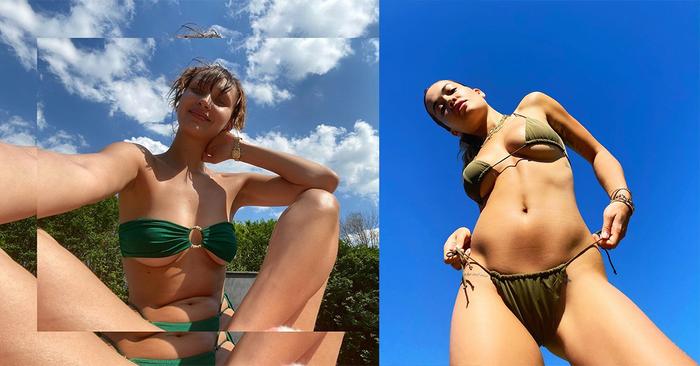 Though summer doesn’t officially start until June, our celebrity-bikini-watch efforts are already in full swing. Notable recent sightings include Bella Hadid wearing the same crinkle bikini as Jennifer Lopez, racking up a casual combined nine million likes on social media, and Lili Reinhart in an über-bright neon bikini (also a look J.Lo has been behind). Other emerging trends among the celeb set this season include French-cut bottoms, animal print, and optic white. But none have been quite as attention-grabbing as the under-boob bikini. Or, as one of our colleagues calls it, neathage, which is apparently a clever mashup of “cleavage” and “underneath.”

Bella Hadid posted not one, not two, but three selfies in the trend; Rita Ora is on board; and if you’ve been watching Netflix’s Too Hot to Handle series, you’ll have noticed the revealing style is ubiquitous on the show, too. And while this look leaves us with a lot of questions—what happens when you swim in it? Are these micro bikini tops or just regular tops pushed up?—we’re predicting it’s a trend that will only gain steam. Scroll down to see how celebs and influencers are styling the under-boob bikini now.